Halting the spread of cane toads

Cane toads are one of the worst invasive species in Australia. Introduced to Queensland in 1935 as a biological control agent, the toads have spread at a formidable pace across northern Australia, and have had major impacts on native predators such as goannas, quolls, and freshwater crocodiles. The toads have now reached the Kimberley and there is no sign that their conquest is nearing completion. Toads seem invincible. But are there any chinks in their armour that might help us control their spread? Researchers from QAECO are currently attempting to answer precisely this question. 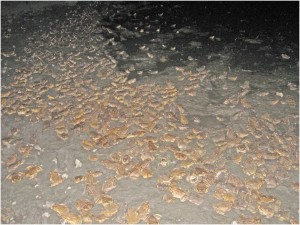 Figure 1: Cane toads can reach remarkable densities around farm dams, like this one at Auvergne Station, NT (Photo courtesy of Ruchira Somaweera)

It turns out the answer might be in the toads’ inability to retain water. Unlike our native Australian frogs, the toads don’t have physiological adaptations that allow them to go without water for months at a time. Toads, particularly in dry country, need to rehydrate every 3-5 days. Without a source of water in the dry season, few, if any toads can survive more than 10 days. So, in very dry regions of Australia, we may be able to halt their spread by excluding them from permanent water sources. If we manage lots of water sources in the same area (e.g., by fencing or minimising leaks in tank and trough systems), we might be able to create a waterless barrier or ‘firebreak’ in the landscape that toads can’t penetrate.

Figure 2: Many Australian frogs, such as this desert spadefoot we found on our trip, are capable of burrowing when times get tough. But cane toads lack such adaptations for an arid existence.

Figure 3: An earth dam used to store water pumped from underground by a mechanical bore. The dam has been temporarily fenced to prevent toads from accessing the water (Photo courtesy of Michael Letnic).

Now this sounds like a fairly ambitious idea–where could we manage all permanent waterbodies to create a waterless firebreak? Well it just so happens that cane toads are expected to reach Broome and continue marching south towards the Pilbara through an arid corridor where permanent water is in short supply. Artificial water points and natural springs dot the corridor, forming a thin strip of suitable toad habitat along the coast. The combination of landscape and climate makes this corridor a potential bottleneck (or choke point) in which to create a barrier.

But how effective might a barrier be at halting the spread of toads? We’ve modelled the way toads spread through this corridor by combining information on the biology of toads, their dispersal behaviour in response to rainfall, and the location of water points in the corridor (Tingley et al. 2013). We ran the model under a ‘do nothing’ scenario and then tested how many water points would have to be managed to halt toad spread. Given the distribution of water points, our preliminary modelling suggests that we would only need to manage around 100 water points to stop their spread. A barrier of this size in the right location would stop the invasion in its tracks, and prevent toads from occupying more than 260,000 km2 of their potential distribution in Western Australia.

Figure 4: Distributions of natural (orange) and artificial (black) water bodies in the study area (black box in inset). The black arrow in the lower left-hand corner of the main figure shows the location of the De Grey River in the Pilbara. Broome is at the top right.

Our modelling suggests that creating a waterless barrier might be a sensible strategy, but we wanted to ask pastoralists and people who know this region firsthand, what they thought of the idea. After all, it’s easy to ‘pretend’ to manage water points on a computer by simply deleting them! If this idea were ever to be implemented on the ground, we would want to be sure about the location of water points in the corridor, how easily we could exclude toads from those points, the willingness of stakeholders to participate, and of course, how much this all might cost. So, to get a handle on some of these questions, we travelled the entire length of the corridor and spoke to as many stakeholders as we could. Our trip was divided into two parts: a road trip and a workshop.

Figure 5: Animation showing the effect of removing 100 artificial waterbodies on the spread of cane toads between the Kimberley and the Pilbara. Red and black dots represent waterbodies that are colonised and uncolonised by toads in each year, respectively.

The first component of our trip involved talking to all of the landholders in the Kimberley-Pilbara corridor. The main aims of this exercise were to: 1) get feedback on the idea, 2) get to know the landscape we’re trying to model, and 3) improve the accuracy of our water point data. The configuration of waterbodies will have a big influence on how easily toads can disperse, so it’s important to get this information right. As a result, we spent a considerable amount of time chatting with pastoralists about the locations of artificial water points (dams, tanks and wells), as well as natural water points such as perennial creeks and springs. 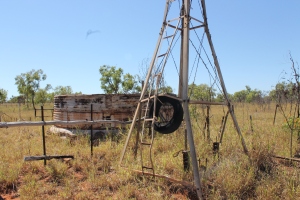 Figure 6: Ben Phillips inspects an old bore near the middle of the Kimberley-Pilbara corridor

To help us work on the feasibility, practicalities and costs associated with stopping the spread of toads, we travelled to Broome to speak with people who know the country and the reality of getting things done. The goal of the workshop was to go back to square one and consider all possible actions we could employ to halt the spread of toads, and to acquire further feedback on the feasibility of a waterless barrier in the Kimberley-Pilbara corridor. In total, approximately 30 people were in attendance from a wide range of stakeholder groups, including Environs Kimberley, Rangelands NRM, Nyamb Buru Yawuru, Kimberley Land Council, Stop the Toad Foundation, the Federal Department of the Environment, Department of Parks and Wildlife (DPaW), Department of Lands WA, Main Roads Kimberley, University of Sydney, University of NSW, University of Queensland and The University of Melbourne. 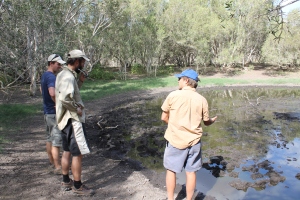 Overall, the road trip and workshop were a great success. We received positive feedback about the idea of a waterless firebreak to halt the spread of toads and now have a better understanding of the landscape we’re trying to model. However, perhaps the most promising aspect of our discussions was the potential ‘win-win’ situation that a waterless barrier might create for environmentalists, pastoralists and indigenous communities. For pastoralists, this idea could present an opportunity to improve their infrastructure and water usage, while implementing and monitoring a barrier could provide potential employment opportunities for indigenous ranger groups in the area.

We also managed to raise awareness of our work through ABC Radio and ABC News (even if they did call Reid ‘Leith’).

Now that the workshop is behind us, there is plenty of work to do. The first step is to refine our maps of waterbodies and tighten up the modelling. Clearly, if we ever decided to spend large amounts of money implementing this project, we’d want to be confident in our ability to make reliable predictions. Then over the next 6 months, we’ll use the model to estimate how much a project like this might cost, find the most cost-effective location for a barrier, and test how robust our decisions are to various sources of uncertainty.

Figure 8: Reid Tingley discusses the feasibility of stopping the spread of toads at a workshop in Broome

So watch this space! There’s plenty of exciting work to come.

1 Response to Halting the spread of cane toads