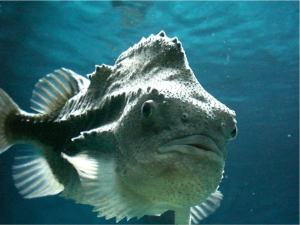 Are you looking for me?

Why do people come looking at this qaeco.com? Is it for the cutting edge ecology, the methodological expertise, or the witty-yet-modest blog posts? Is it even something as mundane as email addresses? Well, probably mostly.

But for the last three years do you know what the second-top search term leading to Qaeco.com was? As you probably didn’t guess, it’s “Fat Fish”.

As you will no doubt recall, some years ago we blogged on a reading group session on marine diversity patterns, with the above picture included and the caption “In Finland they call this the ‘Fat Fish'”, and not a word of explanation.

So, if you’re one of the hordes visiting hungered and salivating for information on the fat fish, and leaving with an unsatisfied belly ache, your urges are about to be answered:

In English, it’s apparently known as the lumpfish or lumpsucker, while in Finland they also call it the lard fish (in Finnish, obviously, which is rasvakala).

The fat fish (as we shall continue to call it), was described by Linneus!

Our correspondent tells us  fat fish are “pathetically poor swimmers, making them quite the pugs of the fish world.” And evidently they’re just as cute.

The fat fish is not IUCN listed! But as they’re widespread in the Arctic Ocean and northen Atlantic and Pacific Oceans, they’re hopefully not doing too badly. In the Baltic, apparently the grow rather tiny because of the low salinity, making them “like the midget pugs of the fish world”, and beloved among the diving community our correspondent says. Elsewhere, as in the above photo taken in Tokyo Aquarium, they can be as big as watermelons.

And why “fat” fish? Because all the lumps are filled with fatty tissues. Perhaps like a seal or dolphin? Or perhaps just because. We can’t let out all the secrets.