Ecology lost a giant last week. It was with great sadness that we at QAECO heard of Professor Ilkka Hanski’s passing after a long illness. Ilkka’s career profoundly affected us. From metapopulation theory, through expansive empirical research, to conservation planning, Ilkka’s research stood as an exemplar that focused our minds and spurred us on. He delivered not just a framework for understanding the complex world of spatial population dynamics, but set a bench mark of rigour that lifted our own aspirations.

Looking back at Ilkka’s career takes one on a fascinating journey. It begins in the fields of Finland, where Ilkka spent long hours of his youth collecting butterflies, bees and beetles. In his own words, it left a lasting impression (Hanski 1999), searing two key elements of population dynamics onto his mind: the importance of habitat patchiness to species distributions, and the changeability of species distributions through time. Ilkka’s PhD at Oxford (1976-1979) provided just the opportunity to tackle these subjects. In an early example of lateral thinking, Ilkka found a study system that was ideally suited to these topics, but which many of us might turn up our nose at: dung beetles dotted among cow manure and carrion flies inhabiting that most patchy of resources, rotting wildlife. Not the most glamorous of systems, but it proved rich ecological pickings. Ilkka finished his doctorate in three years, and published 19 papers on the subject of insect spatial dynamics by 1981.

Returning to Finland, Ilkka continued his work on insects, but also dabbled in the island population dynamics of shrews, spurred on by island biogeography and the equilibrium theories of the preceding decades. It was an important stepping stone in his career, cementing his lifelong fascination with metapopulation theory (Levins 1969, 1970). Ilkka’s key papers from this period tell the story (Hanski 1985; 1986; 1989, 1991, 1992, 1993). Each takes simple equilibrium models of extinction and colonization dynamics as inspiration, and builds in more complex ecological phenomena. His paper in 1992 was pivotal, bringing conceptual advances from island biogeography to bear on metapopulation theory. Ilkka’s idea was to parameterize a model of a species’ extinction and colonization rates from ‘incidence functions’ (Gilpin & Diamond 1981) – the relationships between the rate of occurrence of species among patches and the properties of those patches, particularly their area and isolation. His famous paper in 1994 formalised the approach (Hanski 1994), and the ‘incidence function model’ of metapopulation dynamics was born. It spread like wildfire, with 1300 citations as of today (Google Scholar).

In the 22 years since that foundational work, Ilkka, along with his burgeoning Metapopulaton Research Centre (MRC), transformed spatial ecology and evolution, and blazed a trail in conservation biology. With generations of students and postdocs, Ilkka fostered a unique integration of ecological theory, empirical research and computation. The MRC have published ecological theory in the most prestigious journals (e.g., Hanski 1998; Hanski & Ovaskainen 2000; Hanski 2011; Hanski et al. 2013), completed some of the grandest and most complex empirical studies ecology and evolution has seen (e.g., Saccheri et al. 1998; Ojanen et al. 2013; Jousimo et al. 2014), and developed conservation software that is world beating in its reach and impact (Moilanen et al. 2014). It is a legacy of which Ilkka must have been immensely proud.

But of course, his legacy reaches much further, into research institutions across the globe via MRC alumni, and through his shaping of ecological research, teaching and conservation policy over many decades. Our group is one of many to sport a professional descendant of Ilkka’s; his first academic great grand-daughter, Heini Kujala (Heini completed her PhD with Mar Cabeza, a PhD student of Atte Moilanen’s, who in turn completed a PhD with Ilkka in 1998). Likewise, our group is one of many whose research owes much to Ilkka’s influence. The citation statistics are revealing. Looking back at our own publications, 65 have cited one or more papers authored by Ilkka (data from Scopus). Little wonder Ilkka’s Google Scholar page is something to behold. Since his first paper in 1971, Ilkka’s work has been cited a whopping 44,481 times as of today, giving an h-index of 99. All told, we calculate that Ilkka wrote or co-wrote 291 articles, 71 book chapters and 6 books, and edited or co-edited another 6 books. A remarkable contribution.

We extend our sincere condolences to Ilkka’s family, and to his friends and colleagues at the MRC. We are thinking of you at this difficult time. We will miss him and his unique contributions to the field of ecology, evolution and conservation.

A personal tribute from Heini Kujala

Many times during my years in QAECO I have been asked what it was like to work with the famous Professor Ilkka Hanski at the Metapopulation Research Centre (MRC). In truth, Illka and I worked directly on only one project. But being a close working community, everyone in MRC knew Ilkka well, and he made the extra effort of getting to know everyone himself. Which is not always easy in a group of 70+ members. And whereas Ilkka’s scientific achievements are unquestionable, to me his most amazing merits lay in the type of scientist he was: humble, fair and forever driven by the passion to learn more about the world around us.

After winning several prestigious international prizes and being nominated as one of the 12 Finnish Academicians of Science (the highest academic title in Finland, that one holds the rest of their life), Ilkka was often asked what it means to a researcher to be acknowledged at such high level. Being the type of person he was, Ilkka replied that whereas winning prices and achieving titles is always nice, the feeling often soon passes, as the true reward for many scientists, him included, was the joy of doing research itself. Ilkka was a passionate scientist. Even when leading the large Metapopulation Research Centre, supervising students and postdocs and coordinating various other side projects, he never gave up doing hands-on research himself. This included field work, often on the mountainous parts of Madagascar and Borneo. For example, about 10 years ago, when Ilkka was in his early 50s (and me in my early 20s) I was helping him to collect beetles on the steep slopes of Marojejy National Park in northern Madagascar. Already on day one I had to admit he was far more fit running up and down the steep tracks than I was. 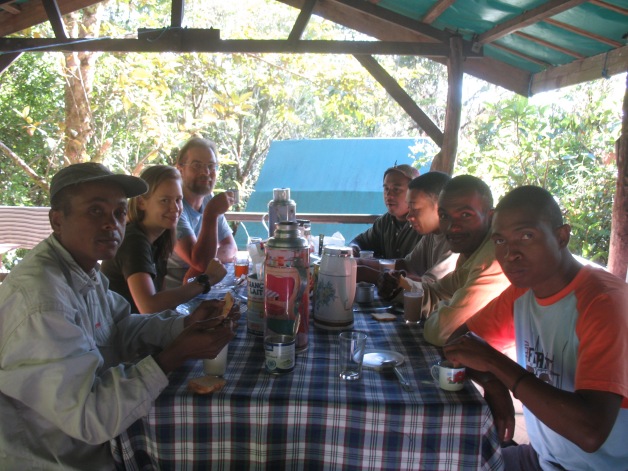 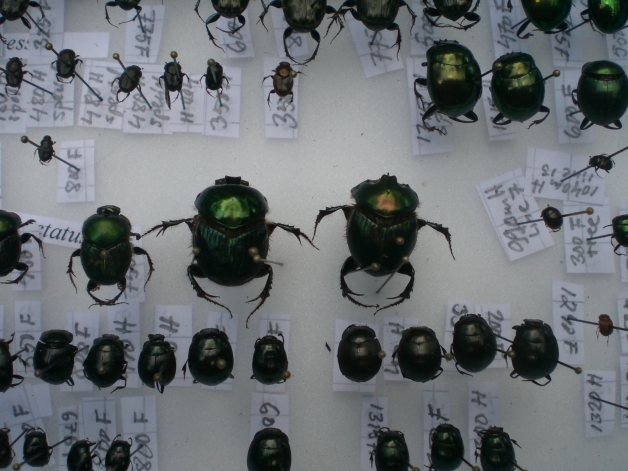 In addition to being a passionate scientist, Ilkka was a passionate environmentalist and science communicator. He wrote several popularized articles and books about science and nature (including the book Messages from Islands), and gave numerous talks to non-academic audiences. He was firmly of the opinion that one of a researcher’s key responsibilities was to bring the scientific evidence to public discussion. Everyone who knew him knows that he never shied away from saying his opinion, but he always based them on facts and knowledge, and he was quite willing to change his mind if, eventually, he was proven wrong. I am sure his ability to explain complex scientific problems and causalities in simplified and understandable terms greatly aided his career as a successful scientist.

Looking back, I realize that Ilkka left several permanent marks in my life as a researcher, some of which I’ve always known and some of which I’ve come to understand only after leaving MRC. I remember well how Ilkka always told us to be humble with science. To learn from failures and let the data, not the scientist, tell the story. He never put himself on a podium – not even after receiving all possible acknowledgements and prizes an ecologist could ever achieve. He liked to point out that his work was the result from collaborating with so many great minds, building on the findings of those before him. The door to his office was always open, he was always interested in everyone’s work, always happy to meet new people. One of Ilkka’s wonderful characteristics as a group leader was that he never stopped looking for improvements to the way the group worked. And by this I do not mean just finding the most competitive and best suited candidates for open positions. No, Ilkka put significant effort in making the MRC a great working community. He regularly brought foreign researchers into Helsinki for visits, for student seminars, and to act as PhD examiners or as collaborators, and encouraged students, post docs and colleagues to network, travel and garner experience from outside MRC (mostly leaning on the lab’s own funding). But he also considered the less obvious things. Like insisting (in his kind persistent way) that everyone in the lab participated in the daily coffee breaks. Or organizing annual lab retreats where much of the discussion was about how to make the lab a better working environment for everyone, and how the make MRC succeed together. That is where I see he made one of his most amazing breakthroughs – by being the strong leader everyone could trust and count on, but at the same time, making everyone in the group feel that decisions, and achievements, were made together. I hope to learn some day how exactly he did this. 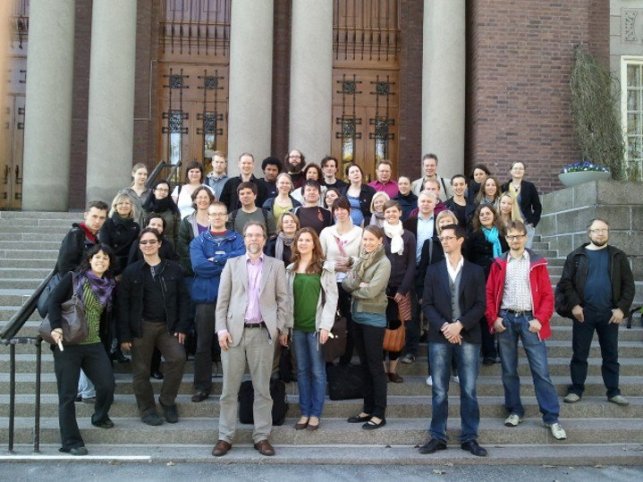 The MRC in Stockholm. Ilkka took the entire team with him to attend his Crafoord Prize Gala. Photo: Evgeniy Meyke.

As stated by many, Ilkka left behind a huge scientific legacy. But for an early-career scientist such as me, he left something far more precious – an idea of a great, humble and persistent researcher who was always looking for ways to improve both his work and the broader research community while trying to solve the mysteries of life. I am sure I speak for many when I say that it is not just his scientific merits that make his passing so overwhelmingly sad, but the fact that he was such a wonderful and inspiring colleague, mentor and a friend to so many people around the world.

Kiitos kaikesta Ilkka. Thank you for all your time and everything you taught us. You will be greatly missed.

Hanski I. (1986). Population dynamics of shrews on small islands accord with the equilibrium model. Biological Journal of the Linnean Society, 28, 23-36.

Levins R. (1969). Some demographic and genetic consequences of environmental heterogeneity for biological control. Bulletin of the Entomological Society of America, 15, 237-240.

3 Responses to Homage to Hanski